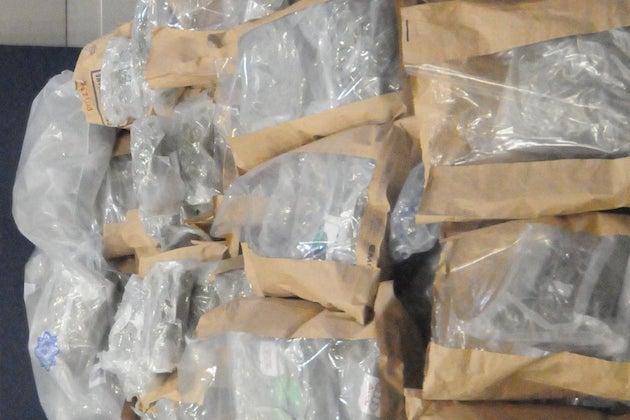 CO KILDARE, Ireland – Two men in their mid to late 40s have been arrested and 374kg of Cannabis Herb worth €7.4 million have been seized in Co. Kildare.

The arrests and seizure were part of an intelligence-led operation carried out on Thursday by officers attached to An Garda Sochna’s Garda National Drugs and Organised Crime Bureau (GNDOCB) and Special Crime Task Force (SCTF), assisted by personnel assigned to the DMR.

The two men arrested, aged 49 and 46, are currently detained in Naas Garda Station.

“The operation undertaken today involving participation by the Garda National Drugs and Organised Crime Bureau and personnel in the DMR, which has resulted in the seizure of illicit drugs with an estimated street value of €7.4 million, demonstrates An Garda Sochna’s continued determination to tackling the supply of controlled drugs, that cause significant harm and misery in our communities. We will continue to target those who are engaged in the distribution of illicit drugs and tackle criminality engaged in by organised crime gangs who benefit from such activity,” Detective Chief Superintendent Angela Willis, head of bureau at the Garda National Drugs & Organised Crime Bureau, said Thursday.

Assistant Commissioner John O’Driscoll who is the Head of Organised and Serious Crime added: “The significant success being achieved by members of the Garda Sochna throughout the organisation in tackling serious and organised crime in the challenging circumstances arising from the Covid-19 pandemic, is outstanding and reflects their considerable ability and dedication.”